DEVELOPED TOGETHER WITH UTILITY COMPANIES

Well Guard is an affordable product developed in collaboration with utility companies, and with a focus on especially un-monitored wastewater wells with one or more households connected.

By using the included floating ball, Well Guard can send an alarm when the water level in a sewage well is getting too high. The power supply to the pump station is also monitored, and sends an automatic alarm in the event of a power failure.

The equipment is secured against unintentionally long driving time, which minimizes wear and tear and KWh consumption. So Well Guard provides both security for the citizens and helps the utility company to optimize the operation of the pumping stations. 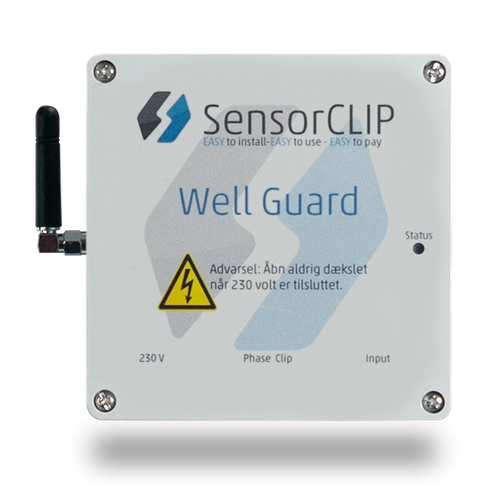 In addition to providing a long driving time alarm, Well Guard also collects data on consumption, that can be downloaded as a report via the associated web portal. Here you can read how many minutes a pump has run, how many starts it has had, its longest running time and how many kWh it has consumed.

These data are used to optimize the pump station, and extend the life of the pump as well as the energy consumption of the well. In addition, the data collected can help to give the citizens an indication of their kWh consumption.

The web portal administrates who is to receive alarms, as well as which parameters are to trigger alarms. For example, in case of inappropriate operation, which is often characterized by the pump running unnaturally long.

The web portal includes an interactive alarm page, which can be opened in the SRO and where all alarms will appear. If an alarm is canceled, a log is generated and removed from the SRO. Likewise, Well Guard can send alarms to the Notifier if this system is used by the utility company.